A Building from a 3D Printer

In a research article published today by Science Robotics, work by Massachusetts Institute of Technology’s (MIT’s) Mediated Matter lab in Cambridge describes a 3D printing method for the construction of large structures.
A robot arm, mounted on a vehicle, controls a nozzle through which an expanding foam is sprayed. With repeated passes, a series of layers of the foam are built up. As the foam expands, it sets and the cavity created by building two parallel walls can then be filled with concrete. The case study shows how an architectural-scale hemi-ellipsodial dome section was 3D printed. 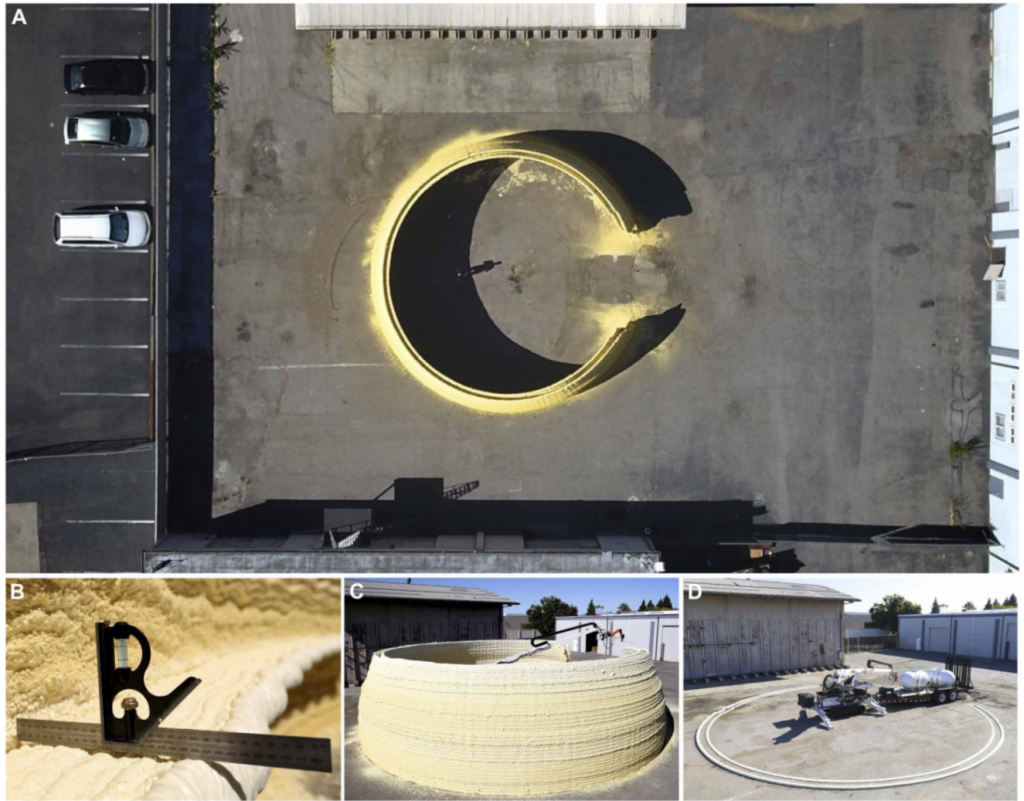 A variety of fast-curing polyurethane foams were evaluated by the team, and Dow Chemical’s Froth-Pak insulation foam was used for the documented test print, “on the basis of cure rate, ease of spray control, and consistency of layer deposition.”
The Digital Construction Platform
The researchers call this the Digital Construction Platform (DCP), “an automated construction system capable of customized on-site fabrication of architectural-scale structures using real-time environmental data for process control.” The version presented in the research is the second iteration of the platform and uses, “a 2015 Altec AT40GW aerial lift system, with a KUKA AGILUS KR 10 R1100 sixx WP electric robotic arm mounted at the aerial lift’s endpoint.”

A video shows the DCP 3D printer successfully printing a 14.6-m-diameter, 3.7-m-tall open dome formwork structure, that the researchers say was completed in less than 13.5 hours. Science Mag say this is the, “world’s biggest botmade building.” Able to extend 10 meters, the DCP has a load capacity of 158 kg. 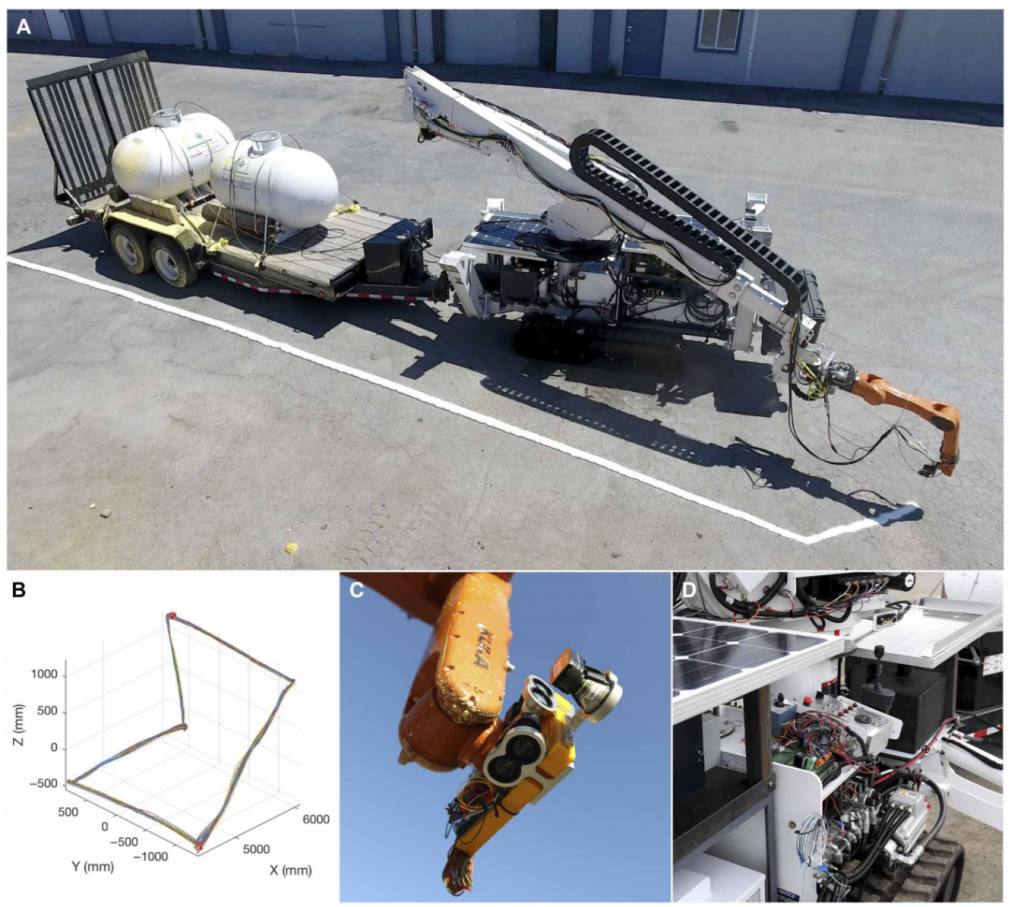 Laser increases stability
Reportedly, the MIT team has received interest from Google, NASA and even a private individual who was interested to learn if the DCP could be used to create an underground basket ball court.
One of the key features that enables the DCP to operate in a precise manner is the inclusion of a laser on of the tip of the robot arm. The laser measures the arms position accurately and feeds back this information to allow for automatic adjustments to be made, and keeps the print run stable.
The DCP, “consists of combined hydraulic and electric robotic arms in a micro-macro manipulator configuration, mounted on a tracked mobile base.” Further details explain how the concept is based, “around a mobile compound robotic arm system composed of a large, 4-DOF hydraulic arm with a smaller, 6-DOF electric arm attached at its endpoint.” This set-up is similar in design to a human shoulder and hand say the researchers. 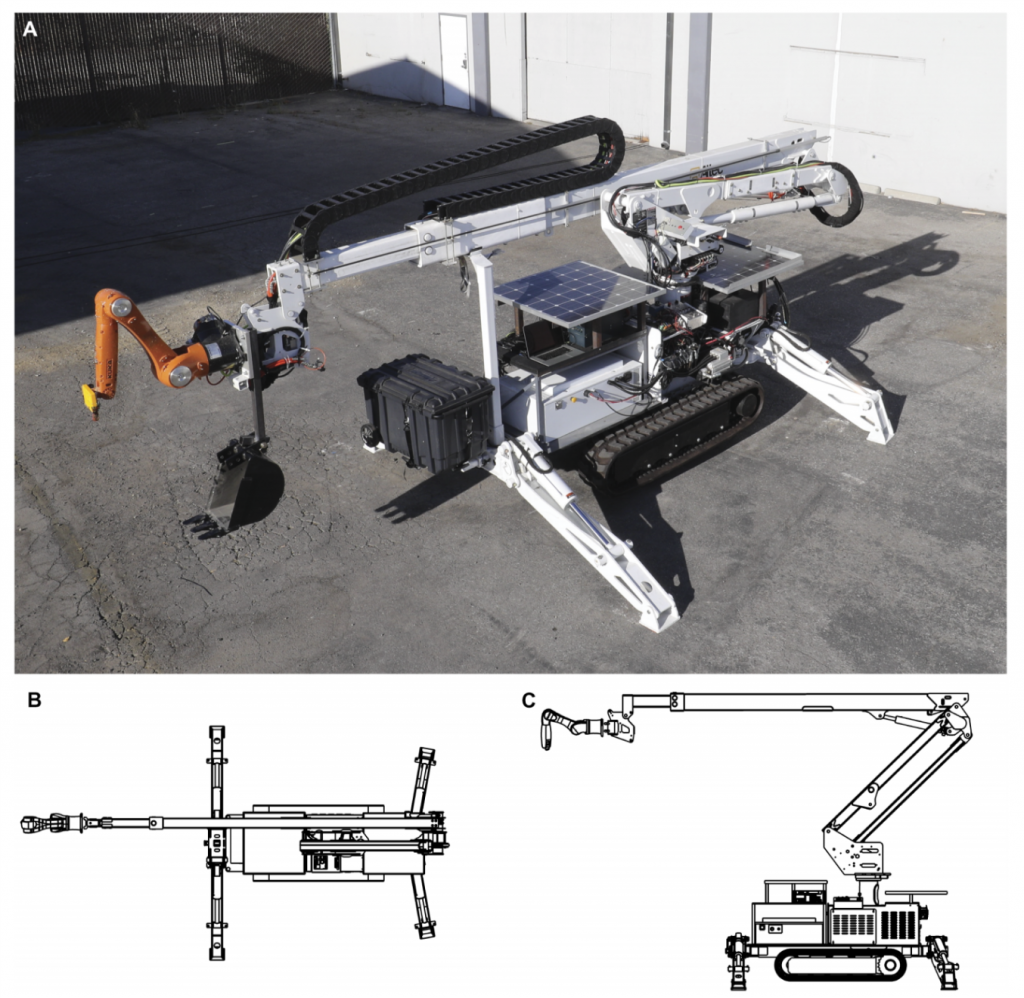 Self-sufficient operation
The project was led by mechanical engineer Stephen Keating who has grand ambitions for the DCP. Speaking to Science Mag, Keating explained that the 3D printer could be used to make a variety of unusual shaped buildings, “Instead of making a square building you can make a Dr. Seuss–looking building for the same cost.”
Off-world construction options may also be a future direction for the research. Equipped with solar panels and batteries, the Digital Construction Platform is designed to work in a variety of environments in a self-sufficient manner. The researchers conclude, “We believe that this is just the beginning of a new intermixed age of robotics, fabrication, and self-sufficiency.”
The article, “Toward site-specific and self-sufficient robotic fabrication on architectural scales” by Steven J. Keating, Julian C. Leland, Levi Cai and Neri Oxman can be read here.