Blackbelt has finally released further details of its 3D printer that combines 3 print heads with a conveyor belt system. The team at Blackbelt have caused quite a stir on social media with teases of the device and have now unveiled its full capabilities.
Aimed at producing large-scale, continuous prints and for series production, the Blackbelt machine brings a new way of thinking to 3D printing. Conveyor belts are often associated with factory production and it seems appropriate for Blackbelt’s device to incorporate this belt system. 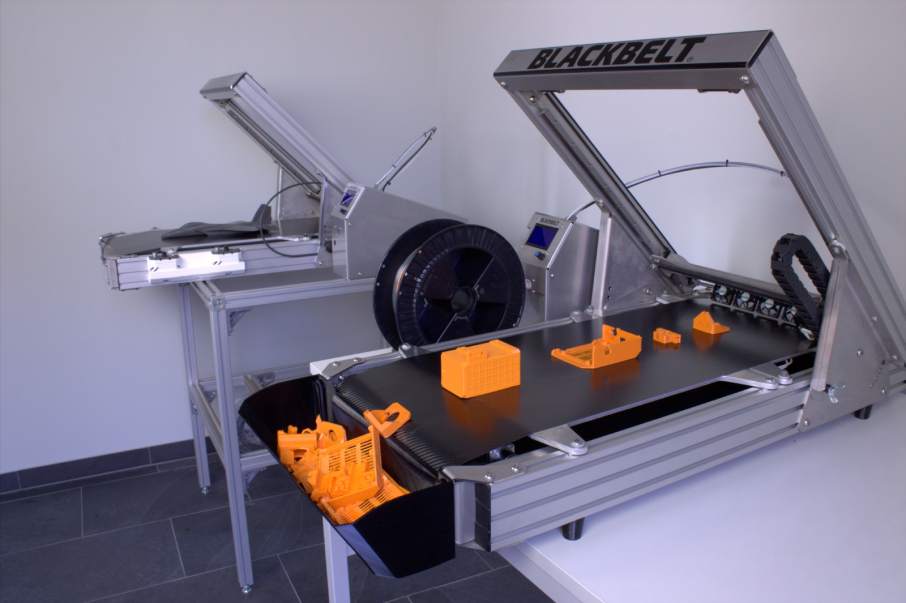 With many companies within the 3D printing industry looking at how to advance their machines for mass manufacturing, Blackbelt has a novel approach of bringing the conveyor belt to the 3D printer. 3D printing bureau Voodoo Manufacturing has similarly had this brainwave recently as it has incorporated a robotic arm and conveyor belt to automate its 3D printer factory. 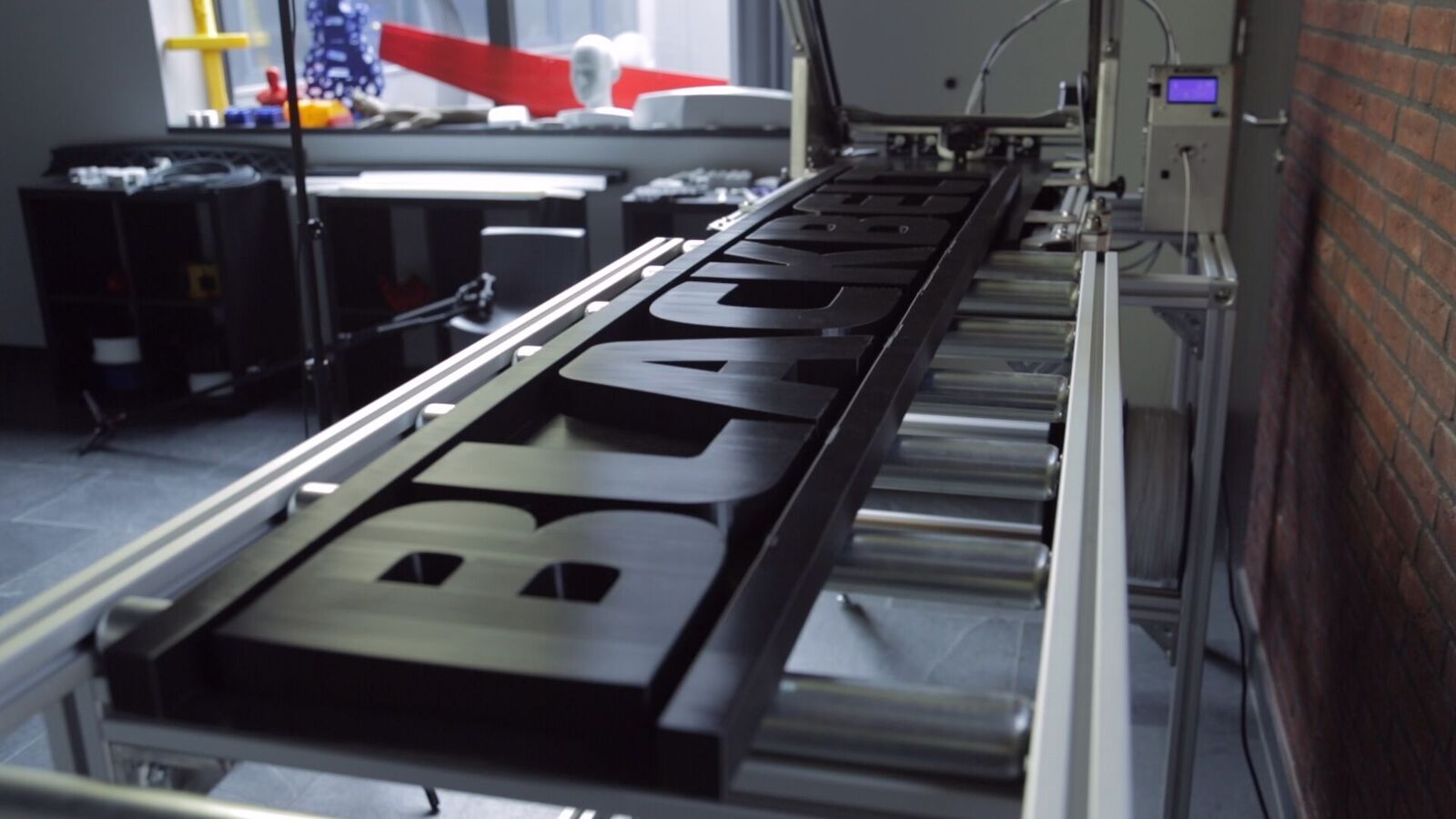 3D printing of “endless length”
The Blackbelt 3D printer houses its 3 print heads on an X-Y actuation system, with the Z-axis in the form of a conveyor belt. This allows for theoretically infinite sized horizontal parts. The idea of infinite size is something Stratasys is addressing with its Infinite Build 3D printer. The device is currently undergoing testing at Ford Motors. 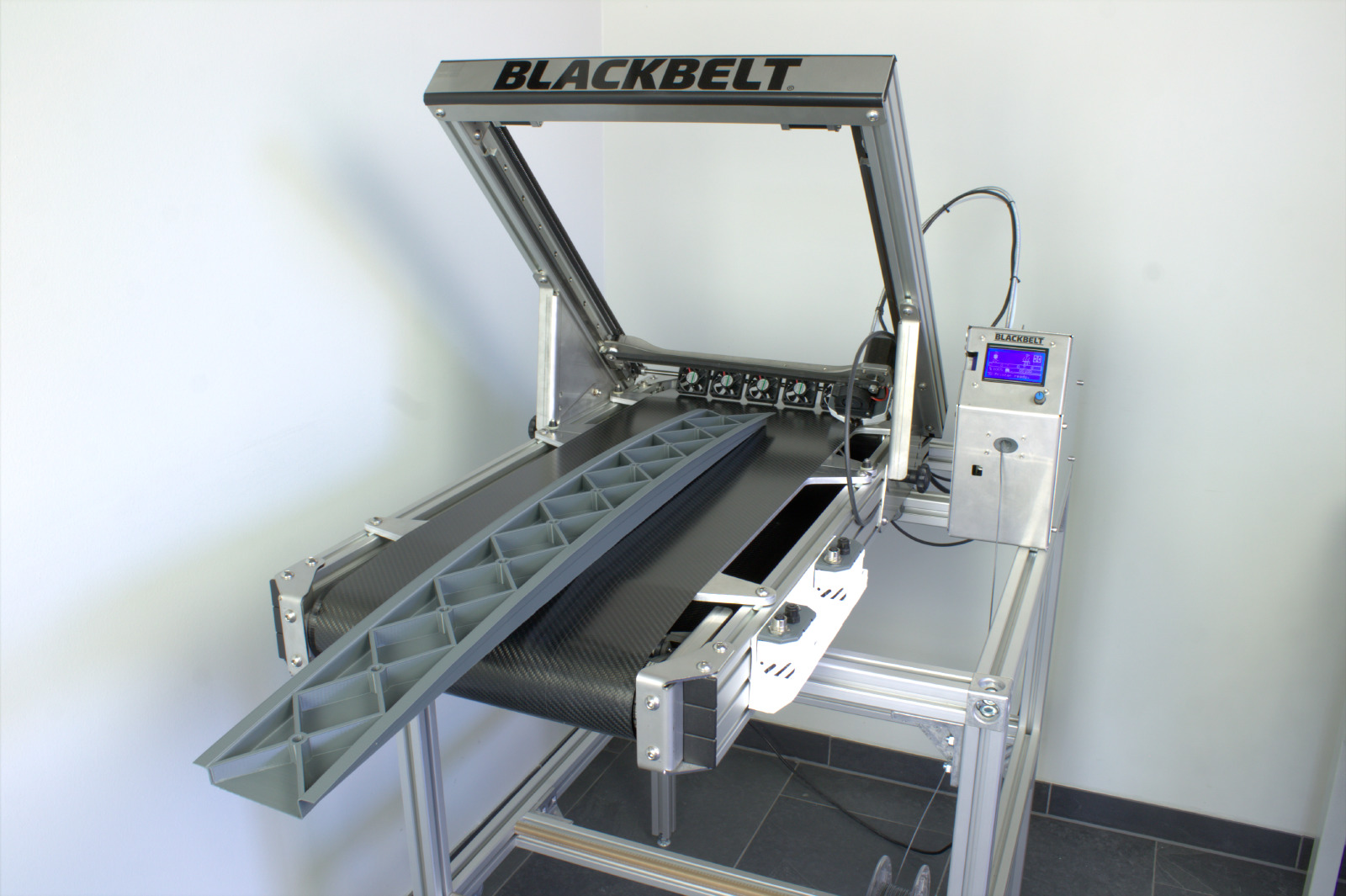 Continuous printing
Not only does the machine’s conveyor belt enable endless horizontal size, its functionality as a moving print bed allows for continuous printing. The printer can hold a container, as shown, that can collect finished parts enabling the machine to keep running.
This function is appropriate for series production since Blackbelt claims it is “not necessary to remove the prints manually.” Blackbelt believe this is enabled because the conveyor belt is made from “carefully selected and well tested carbon fiber composite.” 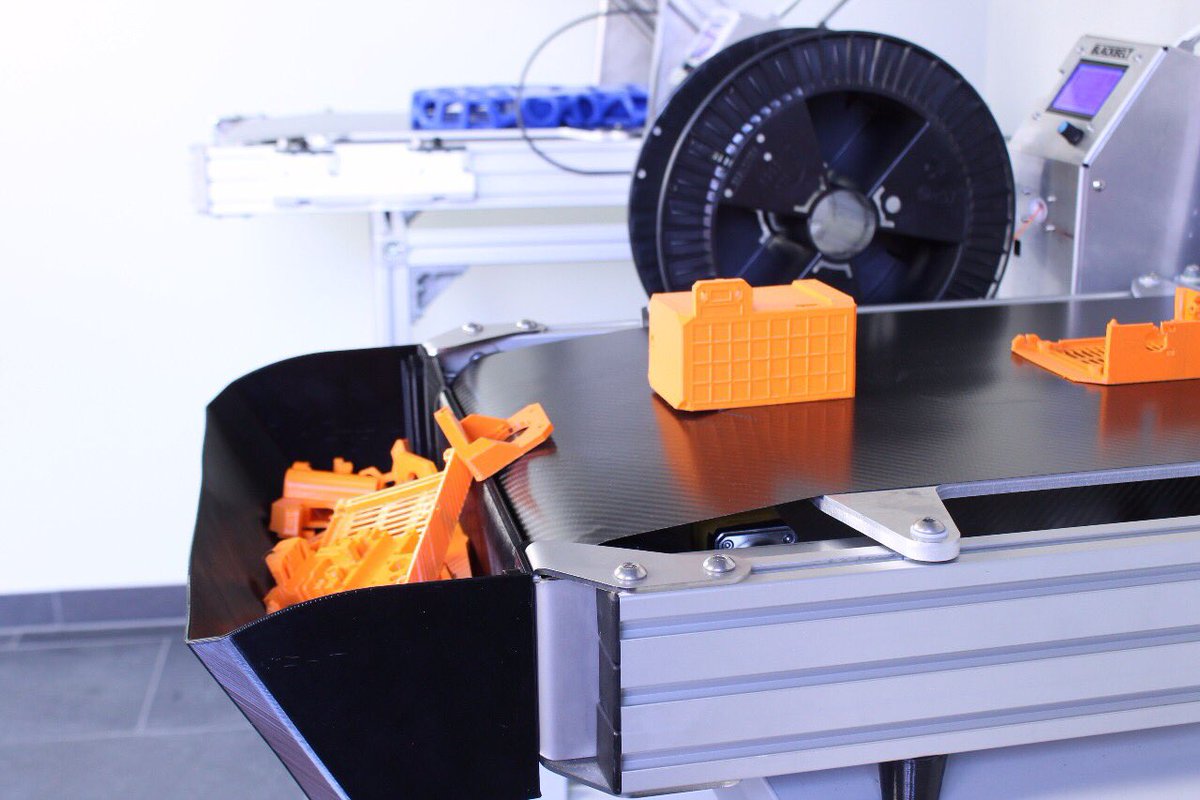 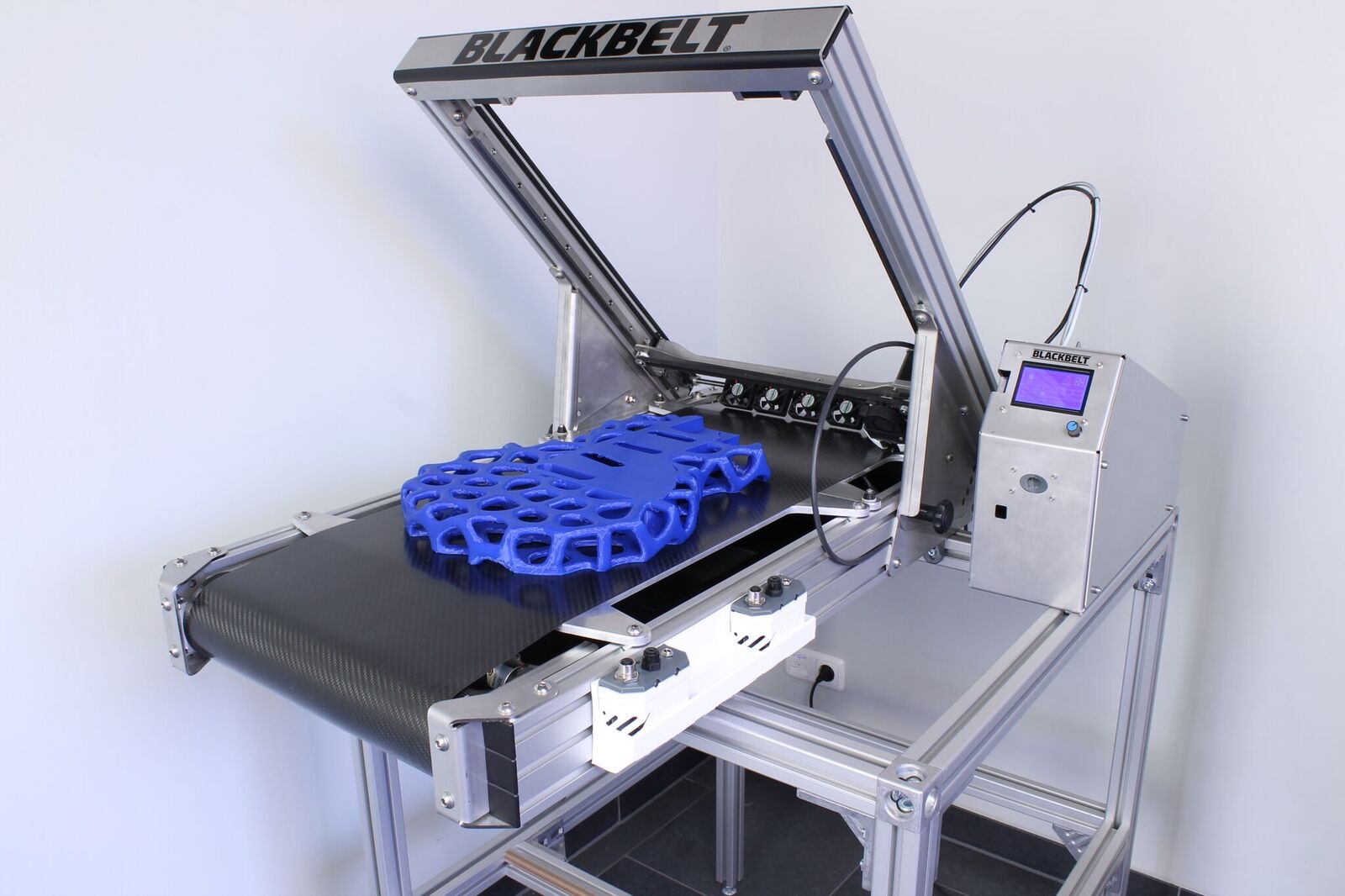 Support free overhangs
Due to the X-Y actuation system’s print angle it is possible to print support-free overhangs. The machine is by default set to print at 45° but this can be adjusted to be lower at 15°, 25° or 34°. However, Blackbelt do explain that some prints may require a starting geometry in order to do this, as shown.

Large format printing
As mentioned earlier, the conveyor belt allows for endless length and the ability to create large-scale printed parts is a major benefit of the device. In order to facilitate this, Blackbelt have incorporated a roller table for support. The company explains that, “for prints of 1300mm or longer, we recommend using the roller table to provide additional support while the printing process.”
The Blackbelt 3D printer will release in two formats, a desktop version and a stand-alone version which includes standing frame and roller table to realize the large-scale possibilities of the device. 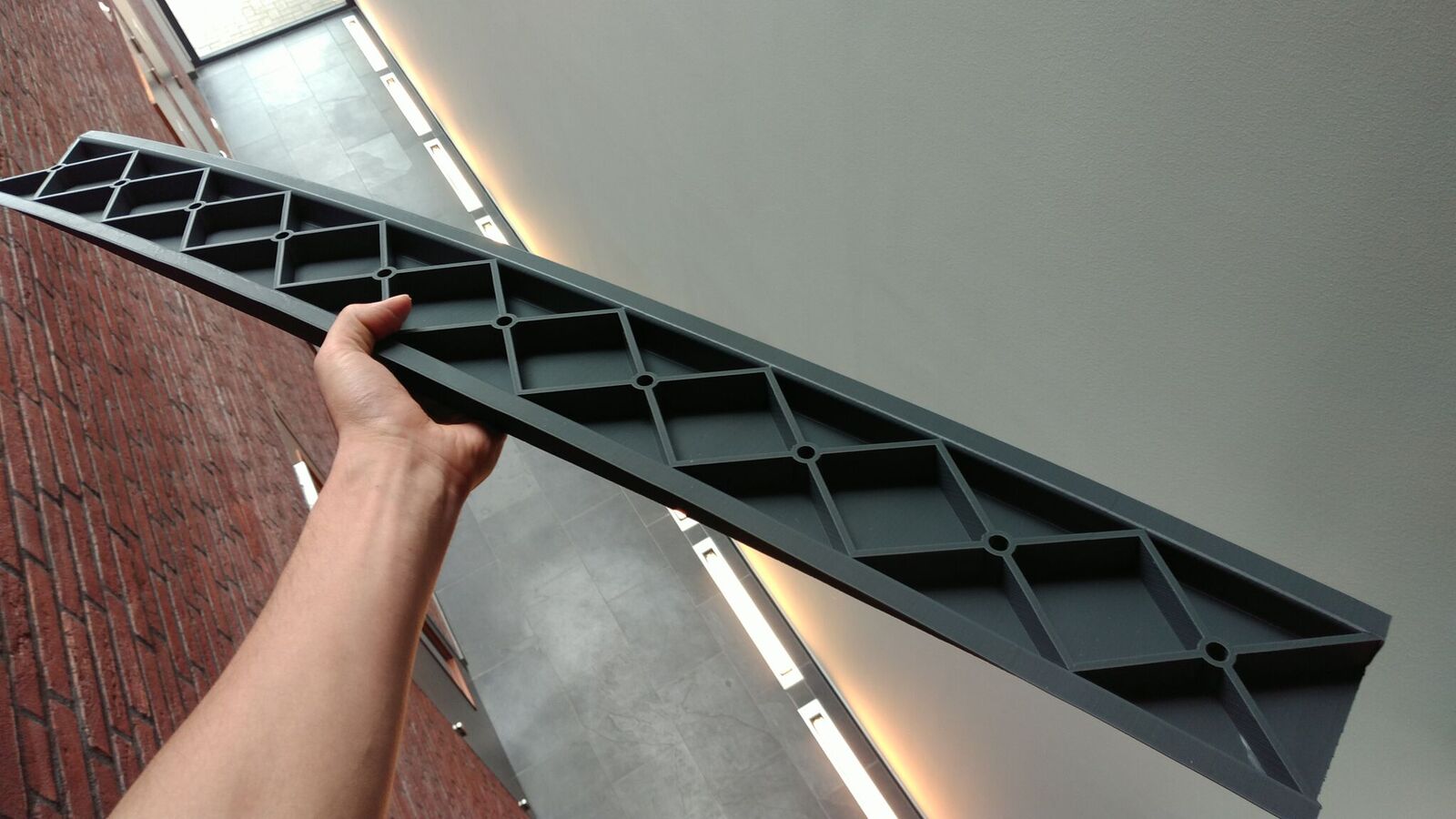 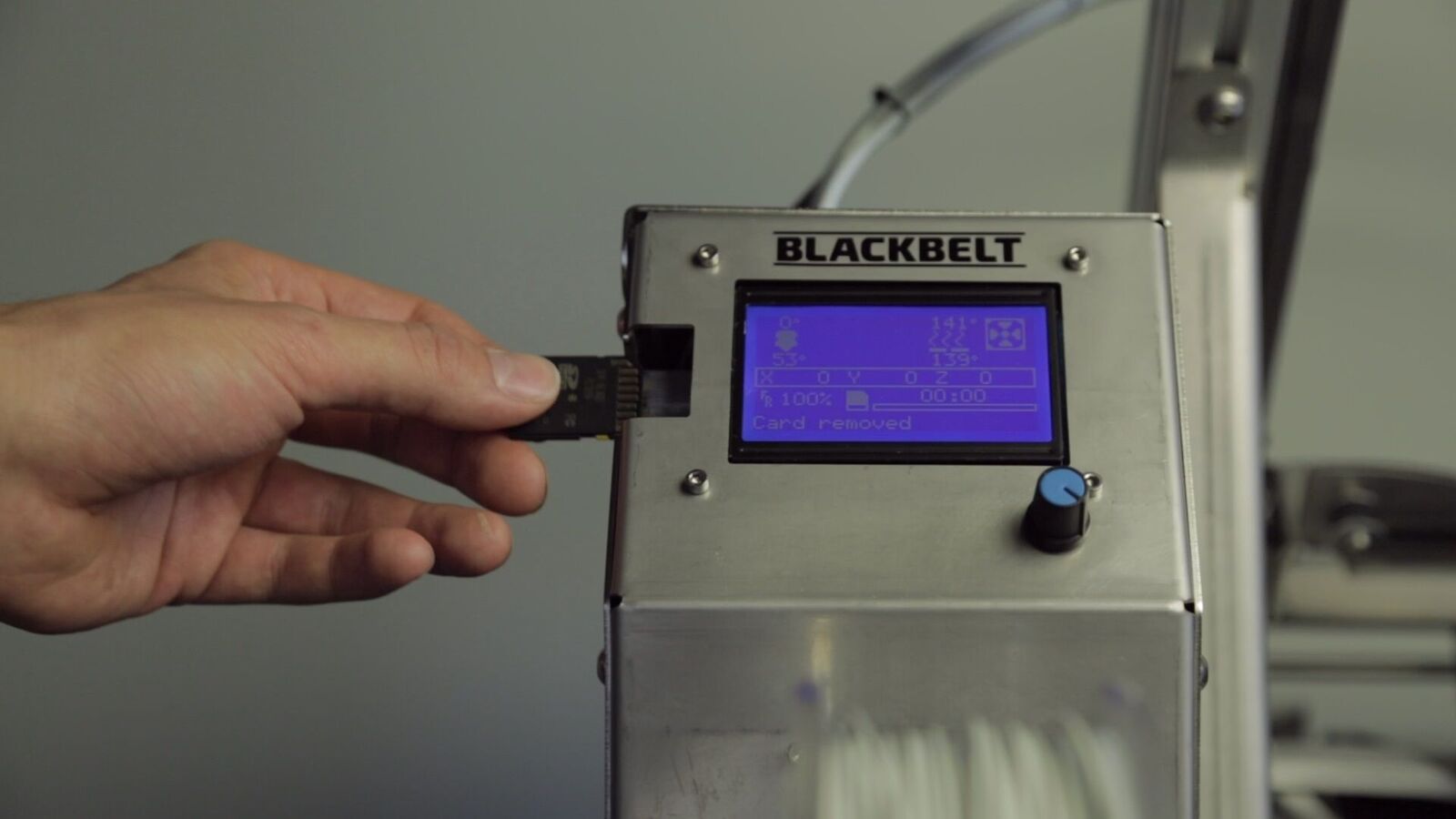